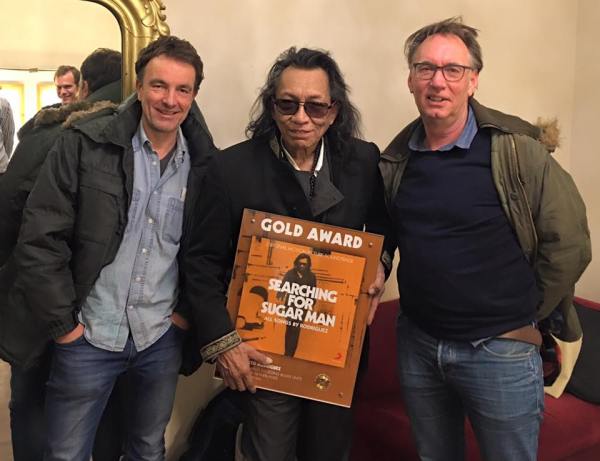 As Cannes mourned the death of Swedish director Malik Bendjelloul, the Swedish Film Institute and Protagonist Pictures set up a special screening of his Oscar-winning documentary “Searching for Sugar Man.”

The non-official memorial “Sugar Man” screening will be held on Sunday May 19 at 9.30 at the Cinema Star 1, 98, Rue d’Antibes in Cannes.

Bendjelloul, who was 36, was found dead in Stockholm on Wednesday, shocking his many fans, in what is reportedly a suicide.

“Searching for Sugar Man,” about the amazing non-career of American singer Sixto Rodriguez, won the best documentary Oscar in 2013.

The Oscar-winning movie director Malik Bendjelloul has died at the age of 36, reports The Associated Press. The Swedish director won the 2013 Academy Award for Best Documentary Feature for his documentary Searching for Sugar Man. Prior to his death, Malik was working on a new project, a documentary about Lawrence Anthony, the man who believed he could talk to elephants.

Here’s what you need to know:

The circumstances of Bendjelloul’s death are unknown. His passing was confirmed by Malik’s brother, Johan, who was speaking to Omni. He said simply, “My brother is dead. The family wants to be left alone in their grief.”

His friend, journalist Hynek Pallas, who accompanied Bendjelloul to the Oscars, called his friend“modest” and “a skilled storyteller.”

Police do not suspect any criminality in the death, according to the Swedish tabloid Expressen.

2. He Was Found Dead in Sweden

Bendjelloul was a native of Sweden and died in Stockholm on May 13. His body was found by police in the Swedish capital. Malik was born in the town of Ystad in 1977 in the southern part of the country.

3. His Documentary Won a String of Awards

Amazingly, Bendjelloul ran out of money toward the end of filming and was forced to finish recording the movie on an app from his iPhone. His victory at the 2013 Oscars was the first time in 61 years that a Swedish movie won a documentary Academy Award.

Malik Bendjelloul, the award-winning documentary filmmaker, died at the age of 36. Here are the best photos to remember the ‘Searching for Sugar Man’ director.Click here to read more

Bendjelloul’s father was an Algerian-born doctor and his mother was a painter, Veronica Schildt.He studied journalism in college, where he got his start in documentary film-making in Swedish television. His early documentaries were about music stars like Elton John, Kraftwerk and Bjork.

Before going into directing, Bendjelloul was a child actor. He was most famous in his homeland for his role in the TV show Ebba and Didrik, in which he played the role of Phillip.

Police spokeswoman Pia Glenvik told the Associated Press that Bendjelloul died in Stockholm late Tuesday, but wouldn’t specify the cause of death.

“Searching for Sugar Man,” about the life and career of American singer Sixto Rodriguez, won 2013 docu Oscar as well as awards from Bafta, the IDA, the PGA and the DGA.

Born in Sweden, Bendjelloul appeared on TV as a child and then studied journalism and media production. He produced music documentaries for Swedish television and worked as a TV reporter before leaving to travel in Africa and South America.

He filmed the story partly on an iPhone, and the film was accepted as opening night film at Sundance before it was even finished.

“I was backpacking around Africa and South America looking for stories with a camera. I found six stories and this was one of the six. I thought it was the best story I’d ever heard,” he told the Independent newspaper in 2012.

Simon Chinn, the double Academy Award winning producer of Searching For Sugar Man and Man on Wire has told up coming documentary-makers to look to the ‘small screen’ when making films in future.

Speaking in conversation with Dick Fontaine, NFTS Head of Documentaries at an NFTS Film Clinic event, hosted at Google UK HQ in London, Simon Chinn, said although documentary films could still be theatrically released, the landscape of distribution was changing. Chinn recently launched a new company, Lightbox, to create high quality non-fiction content for the international television and digital marketplaces.

He added: “There is a hunger for documentary content for the small screen, especially from American online companies such as Netflix, Amazon and Xbox. New opportunities are emerging online for a diversity of documentary makers and new audiences are opening up. The public wants more documentary content, partly driven by reality TV. But the bar has risen; documentary makers have to tell stories in an even more entertaining and emotionally engaging way than fiction.”

Imagine that you are filmmaker who won an Oscar. You think about how the film was made and realize that even the music score and some animations featured in it are your own. They are there because the film almost didn’t happen. Because funders and producers didn’t believe in it. In this presentation, such a filmmaker will talk about never giving up on a good idea and to find ways to materialize it for the world to see it.

via Late Night Keynote Presentation with Malik Bendjelloul | The Conference 2013. 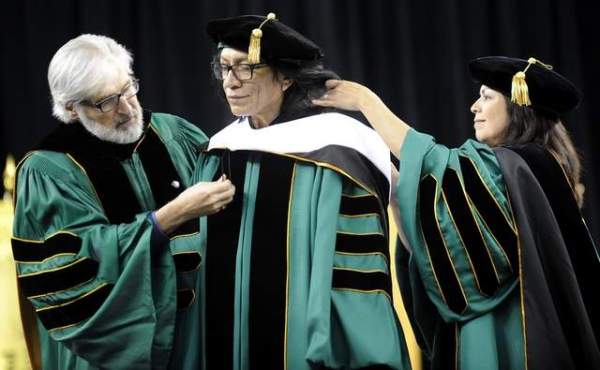 Detroit — The Detroit musician who’s suddenly become one of Wayne State University’s more prominent alumni wished the class of 2013 good luck Thursday as he received an honorary degree from the school.

Rodriguez, who garnered international fame this year after starring in the Oscar-winning documentary “Searching for Sugar Man,” was presented with an honorary Doctor of Humane Letters degree at the ceremony for his “musical genius and commitment to social justice.”

Rodriguez’s two albums in the early 1970s received little attention in the U.S. but he unknowingly developed a cult following in South Africa during the apartheid era.

Hey Folks! Here’s a friendly reminder to set your time clocks for Thursday, May 9 at 10 AM EST (Eastern Standard Time) and click on the live stream link – http://wayne.edu/live/ – to cheer on Rodriguez as he receives his honorary doctorate – Doctor of Humane Letters – from his alma mater Wayne State University during the university’s 10 AM commencement ceremony. Here’s a world time converter link: http://www.worldtimeserver.com/convert_time_in_BR-GO.aspx. And in your browser, please type in Change.org Sixto Rodriguez Kennedy Center; scroll down the page to find the petition link; click on the link; and sign the petition to nominate Rodriguez for a Kennedy Center Honor in Washington, D.C. 4,265 people have already done so and as of today (May 6, 2013), there’s 735 signatures needed. Please spread the word through your social media networks to get these 735 signatures and finish the petition – together, we can do this!

The star of an Academy Award-winning documentary called “Searching for Sugar Man” will reportedly receive an honorary degree from Wayne State University this spring.

The Detroit News reported the news this week and mentioned Rodriguez will receive a Doctor of Humane Letters from WSU on May 9 at the 10 a.m. commencement ceremony.

Rodriguez is an 1981 graduate of Wayne State who studied philosophy. He lives in the city’s Woodbridge neighborhood near the school’s campus and bought his home for $1 decades ago during a federal land auction. 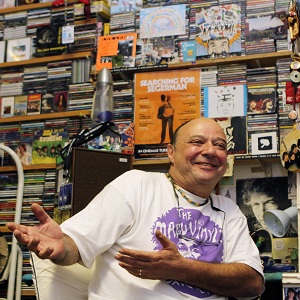 Documentaries are difficult to get right. They can be overbearing, they can be boring and they can often feel as though you are being force fed the personal feelings of the writers and directors.

Having recently won the Academy Award for Best Documentary, one would expect that Searching for Sugarman (2012) avoids these traps. For the most part it does exactly that.

Searching for Sugarman is a heart warming feel-good story about the re-discovery of 1970’s Folk singer Rodriguez.

via Searching for Sugarman (2012) | Unambitious Us. 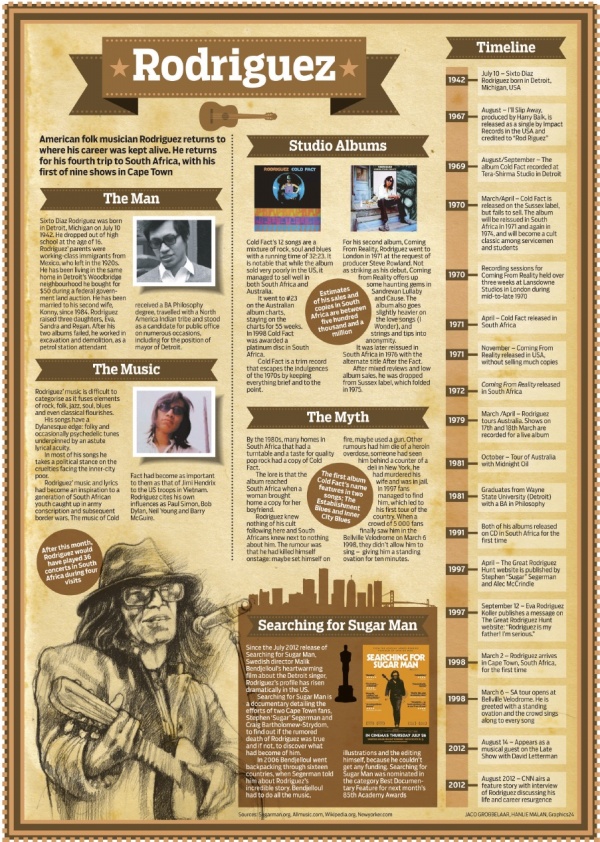 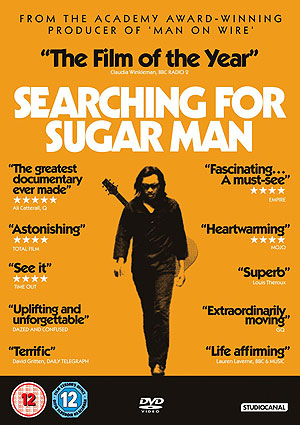 In the modern world, celebrity culture has saturated almost every single aspect of our lives. It comes in the forms of the desperation for fame to be found on reality television, glossy gossip magazines and bookstores with entire sections devoted to celebrity hardbacks. In the modern era, a young footballer in his early twenties will already have produced at least one ghost-written autobiography. Z-list actors and one-hit pop stars are more than happy to debase themselves by eating cockroaches in the jungle. Fame has almost overtaken the resulting fortune as the coveted unit of currency and people of all shapes and sizes expressly long for it – or at least their allotted five minutes in the limelight.

In the world of music there are, naturally, alternatives to the pre-fabricated or talent show pop acts that spring up on a regular basis. The world still has many a band who get where they are through long years of graft. But given that current culture is permeated to the highest degree with a desire for fame, the story presented in Malik Bendjelloul’s riveting music documentary, Searching For Sugar Man, is even harder to believe.