If you haven’t seen the documentary Searching for Sugar Man, then consider this a spoiler alert. If you’ve already seen it or you’re not going to see it any time soon, then keep on reading. (But first, take a second to sign this Change.org petition!)

In the late 1960s and early 1970s, Sixto Rodriguez created brilliant music that was the stuff of legend, but for whatever the reason, his records didn’t sell in America. And he fell into obscurity.

It is rare that a documentary elicits emotions that I carry with me for days and weeks after I have seen it. But that is just what Searching for Sugar Man did. This film tells the story of Rodriguez, whose songs inspired the movement to end apartheid in South Africa and whose lyrics became anthems of change for people around the world.

Filmmakers document one Detroit construction worker/songwriter who never knew he was the ‘Bob Dylan’ of South Africa.

The band, The Bluestreet Players, consists of Mick Laden from East London on guitar, vocals and harmonica, in the role of Bob Dylan, and David Bickers from Manchester UK, playing accompanying electric lead guitar. Mick and Dave both performed professionally in the UK for many years.

Classic Dylan hits include: Blowin in The Wind, All Along The Watchtower, A Hard Rain is Gonna Fall, Like a Rolling Stone, Masters of War, The Times They Are a Changing, Forever Young, and Make You Feel My Love, plus others.

Booking is essential to avoid disappointment as seats are limited. Admission is R75.
To book in advance please phone 078 694 1568
Advance booked tickets can be collected and paid for at the door, on the night.

Please make a note of the dates, pass the good word on, and come along and see the show

you can see a clip of them at 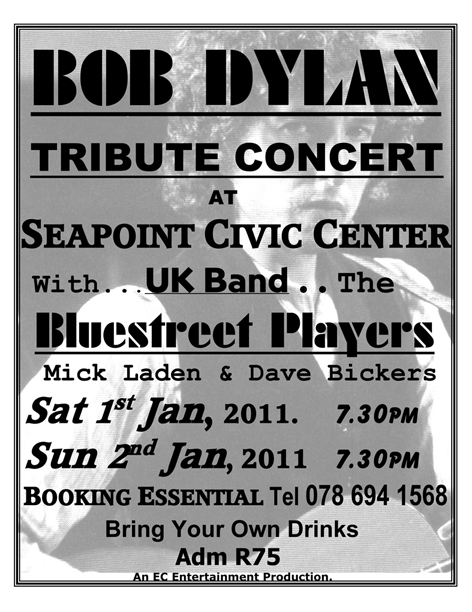 I’ve always enjoyed Rod Stewart’s soul covers on his 70’s albums; ‘You Make Me Feel Like A Natural Man’, ‘If Loving You Is Wrong, I Don’t Want To Be Right’, ‘I Know I’m Losing You’ and ‘You Send Me’ spring to mind. Now in 2009, this 64 year old recently released a great collection of soul covers ….  great album.

In July 2008, then 73-year old Leonard Cohen recorded ‘Live In London’ which was released as a double CD in March this year. A superb collection of songs with incredible musical arrangements, linked by Leonard’s surprisingly lighthearted banter and continuous acknowledgment of the band.

Bob Dylan – Together Through Life

I have never been a big fan of Bob’s vocal style, but he sure writes some awesome songs. On this album, featuring the two guys kissing on the cover (c’mon, look closer), he teams up with Grateful Dead lyricist Robert Hunter and produces some fine swampy, bluesy songs.

Uriah Heep first appeared in 1970 with their ‘Very ‘Eavy Very ‘Umble’ album featuring the classic ‘Gypsy’. I was hooked, and am still a fan today.  They are still going strong, though guitarist Mick Box is the only original member.

2008’s ‘Wake The Sleeper’ is one of my albums of the last decade, and Uriah Heep recently released ‘Celebration’. This album features only two new recordings, the rest are newly recorded covers of their greatest hits. Not always a recipe for success, but these new recordings breathe new life into many of my old favourites, except for ‘The Wizard’, which just doesn’t seem to work.

U2 – New Line On The Horizon

Neil Young – Fork In The Road

Ian Gillan – One Eye To Morocco