It’s hard to type when one’s feet refuse to stay on the ground. I still keep floating around from the euphoria of seeing two awe-inspiring concerts on the weekend, both by the same ou. I’m talking of course about Rodriguez who finally performed to his many South African fans and it’s difficult to decide who was more overawed by the confrontation.

Rodriguez had not performed since 1981 and even those concerts, in Australasia, did not nearly attract the same fans as the SA concerts, so, when Rodriguez walked out onto the stage at the Bellville Velodrome, he almost staggered backwards from the roar and vibes that poured onto the stage from the first night crowd. The performance that Friday night was fine if a little patchy but no-one seemed to notice. Rodriguez forgot the odd line and on a few occasions played at a different tempo to the band, who very professionally managed to plaster over these musical cracks.

The second concert on Saturday night, however, was wonderful. A far larger crowd arrived due obviously to a strong local word-of-mouth promotion. Rodriguez and his band were prepared and well-rehearsed and once again the crowd maintained a remarkable level of energetic approval and non-stop singing to each and every song. All the age groups were represented, from 60-year-olds to young children, all caught up in the magic of the moment, signifying indisputably that Rodriguez’s music has passed the test of time and is not simply a ’70s phenomenon.

The response to these concerts was repeated throughout the tour. The two concerts in Johannesburg at the Standard Bank Arena were sold out and generated the same fanatical and ecstatic reaction. One of the Durban dates was replaced by a show at the Carousel complex outside Pretoria and that too was full. There is a strong feeling that this remarkable tour could be the spark that hopefully kick-starts Rodriguez’s long overdue world-wide recognition. Through the Internet, his fans all over the world have been closely monitoring these events in South Africa and requests for tours have been received from as far afield as Australia, Canada, England and the USA. Some United States newspapers have already started making enquiries, sensing a story in all of this!

Rodriguez is a humble, intelligent and sensitive man who deserves all the recognition he will no doubt be receiving. After both the Cape Town shows, he mingled with the assorted press and fans who had lingered backstage to meet him and shook hands, hugged, spoke to and signed autographs for each and every one of them until he was satisfied that no-one had been overlooked. As they say in Yiddish, he is really a mensch!

I am still quite overwhelmed by the whole Rodriguez situation. We all believed he was dead but he most certainly wasn’t and here he was recreating his music that meant so much to so many people for so long. I will always remember singing along to all those songs that are so deeply embedded in my/our memories, but three special memories stand out for me. The first was seeing Rodriguez’s two daughters, Eva and Regan, sitting at the foot of the stage watching their father perform. Eva was a teenager when Rodriguez toured Australia and Regan was much younger. The pride and joy that radiated in their faces was quite beautiful.

The second was the guitar solo by Willem Möller that turned the band’s jammed improvised version of ‘Climb Up On My Music’ into the high(est)light of a concert packed with highlights. The third image I have is of Arno Carstens, lead singer with the Springbok Nude Girls, standing transfixed at the base of the stage watching Rodriguez perform. On his T-shirt was the simple yet ironic slogan that seemed to sum up the whole evening. It read: “Dead people are cool!” 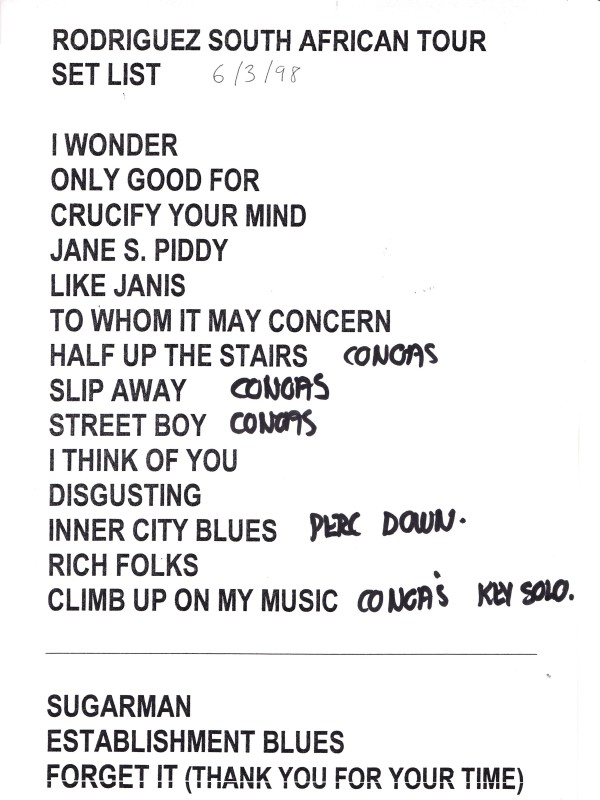 Below is the scan of the planned set list from the sound engineer’s mixing desk; compare this to what was actually played!

70s (and 80s and, it seems 90s) folk-rock “icon” Sixto Rodriguez played his first South African performance live at the Bellville Velodrome on Friday, 6 March 1998.
Evan Milton was there.

“He’s really alive!” were the words on more than one nostalgic fan’s lips as a crowd of over 2 000 listened to Rodriguez’s first ever live performance in South Africa – and his first appearance on stage in 18 years. The “Sugar Man” enthralled from the first, instantly recognisable, notes of “I Wonder” through to the much requested and long-awaited “The Establishment Blues”. South African Music Association “Best Album” winners Big Sky ably supported the visitor, with Willem Möller’s electric guitar providing a focus during the simpler musical songs, with Russel Taylor’s hammond and Graeme Currie’s bass underpinning the set. Rodriguez was visibly moved by the audience’s enthusiastic response, chanting his name between every song, and with a round of applause and calls of “Rodriguez we love you” following each song.

The Mexican American revealed a refreshingly contrasting “superstar attitude” to other recent international visitors, repeatedly bowing and thanking both band and audience. At one point the singer called for silence, in his unmistakable voice said, “A picture” and stepped back, miming the action of taking a huge snapshot of his fans. Ranging in age from 16 to 50-plus, those fans sang along to most tunes, with nostalgia and youthful idealism in equal measure as the older remembered their upstart 70s youth and the younger drew on the libertarian lyrics and social commentary as idealistic focus inspiration. Finishing the one-and-a-half hour set, Rodriguez was briefly visible on a parapet leading to the dressing rooms, and waved a final farewell to the ecstatic crowd. After the concert, he shook hands with, and personally thanked the hundred-or-so VIP guests, eagerly and animatedly signing autographs, engaging with stories of when and where people had listened to his albums and impressing everyone with his warmth and sincerity. Many left the concert with plans to purchase a second ticket for Saturday night’s performance.

This review was also published with a few changes in the Sunday Argus on the 8th March 1998 under the title: “Sugar Man” Rodriguez sings it to adoring crowd.

“Hey I thought this guy was dead?”
by Kitty Couzyn

It’s one of those Fridays. You know the ones; tickets and invites abound, but all a poor journalist feels like is slipping down a pool cue into a coma some where. Mr Branson’s Virgin Cola launch on Wednesday still monkeys the brain (The Sandton Sun will never be the same again… yuk yuk – those little red canned Virgins with a twist of V-vodka thrown in. shudder). Ah, what the hell, it is after all the Rodriguez concert I’ve been invited to. Time to scrape the carcass into the volkswagen and speed off in the same direction as Zaire. Finally, after finding directions from a toothless garage attendant that assuredly I’ve seen speaking backwards in a Lynch movie, screech to a halt outside the Bellville Velodrome. It’s always heartwarming to see how the local constabulary selflessly protect us at big concerts. (It’s like the annual Big-Blue-Braai out here). Judging by all the rumour and heresay I’d heard this concert was either going to a significant moment or a vaguely embarrassing spectacle. Didn’t this guy shoot himself in the head on stage to protest the general dullness of life when I was about seventeen? Didn’t Agent Mulder discover proof that Nancy Reagan had abducted his father? After eventually wheedling my way into the VIP section for free booze, I witnessed a story that could unfold into an epic fable:
“They found him serving petrol in a garage in South America”
“No it was America.”
“Isn’t it amazing that this guy was only famous in Australia, New Zealand and SA”
“You’re kidding? I always thought He was a god in America!”
“Nah, his record company went bust before he was distributed.”
A PR company couldn’t have created a better angle if they had been on Peyote and Prozac simultaneously. We were about to watch a man perform for the first time in about twenty years. I met the SA journalist who had tracked him down and asked him how he was doing. “Well the truth of the matter is that he’s got severe stage fright. We’re just calming him down.”

As the crowd waited and the news of his shyness filtered out to the four thousand odd devotees, a chant begun. Rodriguez! Rodriguez! Rodriguez! We were all gently encouraging the dude that virtually defined our hey-shoo-wow contemplate-the-universe and overindulge-in-giggle-twig-years. Finally there he was. The Bob Dylan of the Southern Hemisphere, the green poet of our generation. The deliciously anti-establishment prophet of the grey-pit in which we currently reside.He’s dressed in a tie, black shirt and squiggly-print waist coat like some caricatured spaghetti-western version of a coke-dealer.
“That’s funny, he’s actually the age now that I’ve always expected him to be”
In most of our minds he was the dude from the Cold Fact album cover. There he looked like some big bad-ass Indian oil-rig worker. The sweet man with the Donny Osmond shades and ingriating smile was not who we expected. It was impossible not to pick up the sheer bewilderment on his face. It was like:
“Hey esse! Who da fok all these people shouting fo?”
Then began the singing. There it was, that golden voice. After twenty years, like it was mellowed in casks of oak – if anything, more rich and golden. The only way to describe the tidal wave of emotion that erupted is with gratuitous exploitation of expletives and superlatives. Unbelievable! Awesome! Shivers up a thousand spines! One of, if not the best concerts ever in Cape Town. Everyone, knew every word. No, you don’t understand. Every! Word! At one point, the man faltered on a verse and the crowd calmly kept on singing, lifting him back onto the melody like a nurturing mother on the day of her baby’s first steps. What made the whole scene specially touching was the transparency of his true amazement. Imagine going to an obscure country that you’ve never seen before, just to find there are thousands of people who still adore you, for songs you sung in your youth. He was literally a resurrected angel for two mightily special hours. The encore would have gone on all night if they had been allowed to.

At the after-party, the buzz was just soooo infectious. He signed autographs and graciously met all those who wanted to shake his hand. I am Twenty-seven and like to think of myself as beyond the sycophantic irritation stage. But this I had to be part of. Everyone in that room had dreams of Rodriguez taking over America – a resurrection supreme. Some sadly doubted the reality, I for one believe wholeheartedly that Rodriguez could storm the Grammies in 1999.
If we have anything to do with it, he will.
Thank you Mr R, we’ll never forget you,
Now give us your sunglasses!