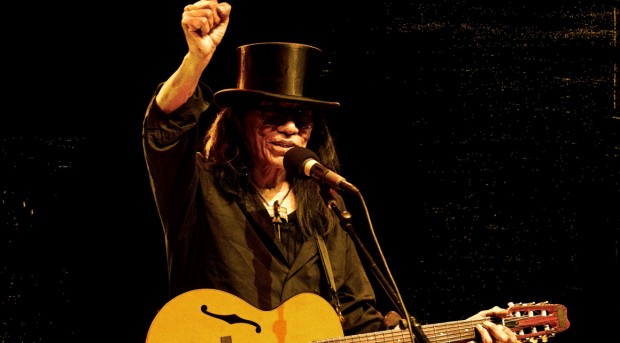 Sixto Rodriguez, the legendary icon responsible for ageless classics such as “Sugar Man,” “I Wonder” and “Climb up on My Music,” is set to release a new live album comprised of recordings taken from his wildly successful 2014 tour of Australia.
The legendary self-taught guitarist’s love affair with Australia is well documented, and ‘Rodriguez Rocks: Live In Australia’ perfectly captures the chemistry that the platinum selling artist shares with his fans down under.
‘Rodriguez Rocks: Live In Australia’ provides a glimpse into the electric atmosphere that followed Rodriguez’ tour around Australia in 2014. The album features Rodriguez originals that have etched themselves rock ‘n’ roll history, as well as a few cover tunes that the Detroit, Michigan singer-songwriter indeed makes his own.
Opening up proceedings with perennial favourite “Climb up on My Music” off his 1971 studio album ‘Coming from Reality,’ Rodriguez takes a walk through a back catalogue that made him a legend. “Street Boy,” which was originally released on Rodriguez’ first Australian live album, 1981’s ‘Alive,’ makes an appearance, while his cover of Jefferson Airplane’s counterculture classic “Somebody To Love” is a shining example of the all-encompassing nature of Rodriguez’ music taste.
The final tune on the album is also taken from the pen of another music legend, with Frank Sinatra’s “Learnin’ the Blues” getting the Sixto Rodriguez treatment to a tee.
Buy at https://www.jbhifi.com.au/music/browse/singer-songwriter-folk-rock/rodriguez-rocks-live-in-australia/322974/