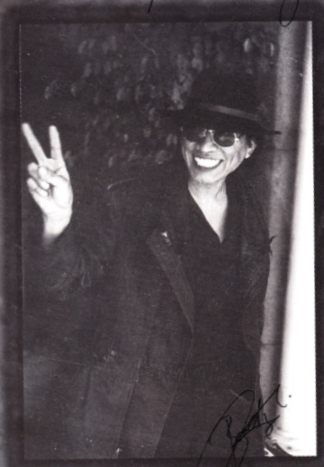 Rodriguez walked into the UCA rehearsal studio in Cape Town, grinning, looking fit and healthy, despite having just got off of a flight from Detroit, leaving the freezing winter behind him. It was the 5th of March 1998, the day before the first show of Rodriguez’ sold-out arena tour of South Africa, and the first time he had ever been to South Africa. There was a media frenzy around the tour and the fact that he was here, alive, well, and ready to rock a country where he was a mysterious, multi-platinum-selling artist, whose only media profile was the picture on the cover of Cold Fact.

We handed him the guitar we had bought him. Laughingly, he said he hadn’t played for a while as he’d been busy working, mainly on construction jobs. Then the voice and the songs we had all been listening to for the past 25 years filled the room.

Graeme Currie, our bass player, played the riff of “I Wonder”, for about the 15th time, and glanced backstage over his shoulder. The Bellville Velodrome was packed, and 7000 frantic fans surged forward to see “The Man”. Standing backstage, Rodriguez looked stunned. The audience spotted him as he took a step towards the lights. Seven thousand
voices erupted in a frenzy as he reached the mic and “I wonder, how many times you’ve been had….” filled the arena.

The next week’s six shows around the country were just as triumphant as the opening night, and it felt as though this was Rodriguez, stepping out into worldwide artistic and commercial recognition. That would only happen more than ten years later, after the release of the Oscar-winning documentary Searching for Sugar Man. The last time I saw him was Friday 13th March 1998, standing in his cowboy boots at 3am on the Durban beachfront, holding a beer and grinning. He looked like a happy man.

It was 2019, the end of the decade, and 1998 seemed a long way back. I crossed the white-baked salt flats of Verneukpan, on my motorcycle, tracing the still visible route of Malcolm Campbell’s unsuccessful attempt to set the world land speed record in 1929, in his racer The Bluebird. My father was 14 when they came through his hometown of Calvinia, and I was always fascinated by this story. My dad was the ukulele player in a band, and together with a
banjo and a concertina player, they played the local folk songs at their towns’ weekend dances.

My bike kicked up fine white dust and the setting sun was blinding in my eyes. It was the second day of a solo motorcycle trip around South Africa, and it felt like I was back in a far-off distant time. The back of the bike was fishtailing as it spun in the soft sand, a jackal bolted for the bushes, and I turned out onto the road to the Namibian border. In a few months, I would be back in the studio after a long break. I opened the bike’s throttle as far as
it would go and felt the future accelerating towards me.

One thought on “The Cold Facts…. A Journey On The Road Ahead, part 9 by Steve Louw”