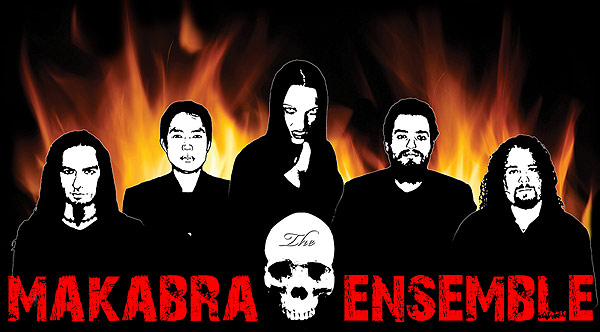 With the recent accolades of THE ARTIST, the attention has been directed at the magic of the silent film again.
Since 2005 THE MAKABRA ENSEMBLE has been resurrecting classic silent Horror films by creating brand new soundtracks for them and performing it live to the screen.

THE MAKABRA ENSEMBLE is the brainchild of Paul Blom and Sonja Ruppersberg of the Cape Town based Industrial-Metal band TERMINATRYX – www.TERMINATRYX.com

They are also the creators and festival-directors of the annual South African HORRORFEST Film Festival every Halloween season – www.HORRORFEST.info
Since its inception in 2005, in addition to a wide range of movies and a literary feature, they incorporated the unique highlight of screening a classic silent Horror movie and performing a brand new, original soundtrack live to the screen, created by TERMINATRYX and various talented friends. In addition to Paul and Sonja, these musicians include Simon “Fuzzy” Ratcliffe (LARK, 1931 RAYGUN), Sean Ou Tim (MR. SAKITUMI, MAX NORMAL, LARK), and violin virtuoso Matthijs Van Dijk (UCT graduate & SAMRO bursary winner).
Sometimes additional musical guests are incorporated, which have included Max Starke, Lara Block, Francois Breytenbach Blom & others.

For 2012 there are two silent classics lined-up for new MAKABRA ENSEMBLE soundtracks, but these are still under wraps – check the web site for updates: www.terminatryx.com/makabra

The blend of the vast musical influences and abilities of these collaborators result in the creation of a unique, passionate and awe-inspiring soundtrack, breathing new life into these cinematic milestones.

All of these classics with their new MAKABRA ENSEMBLE soundtracks are set for DVD release, with “Terminatryx / Nosferatu” already available on DVD, feat. the full movie with its new soundtrack, recorded live at its premiere, plus many extras (incl. the dark short film “imPERFECTION”, Makabra Ensemble live performance extracts, Terminatryx features, music videos and photo galleries).
On-line DVD orders at www.OneWorld.co.za

For all MAKABARA ENSEMBLE info, visit the official web space at: www.TERMINATRYX.com/makabra
To book THE MAKABRA ENSEMBLE, contact Paul Blom at: info
For the annual HORRORFEST Film Festival, head to: www.HORRORFEST.info